2022 Confirmations of Highly Pathogenic Avian Influenza in Commercial and Backyard Flocks, and Detections in Wild Birds

USDA APHIS tracks HPAI confirmations in domestic poultry and detections in wild bird flocks. Check the links below for the most recent data.

February 22, 2022 – USDA Animal and Plant Health Inspection Service (APHIS) has confirmed the presence of highly pathogenic avian influenza (HPAI) in a non-commercial backyard flock (non-poultry) in Suffolk County, New York, and in Knox County, Maine. State officials quarantined the affected premises, and birds on the properties will be depopulated to prevent the spread of the disease. Birds from the flock will not enter the food system.

According to the U.S. Centers for Disease Control and Prevention, the recent HPAI detections in birds do not present an immediate public health concernOpens a new window.  No human cases of these avian influenza viruses have been detected in the United States.  As a reminder, the proper handling and cooking of poultry and eggs to an internal temperature of 165 ˚F kills bacteria and viruses.

In addition to practicing good biosecurity, all bird owners should prevent contact between their birds and wild birds and report sick birds or unusual bird deaths to State/Federal officials, either through their state veterinarian or through APHIS’ toll-free number at 1-866-536-7593. APHIS urges producers to consider bringing birds indoors when possible to further prevent exposures. The Animal Health Protection Act authorizes APHIS to provide indemnity payments to producers for birds and eggs that must be depopulated during a disease response. APHIS also provides compensation for disposal activities and virus elimination activities.  Additional information on biosecurity for non-commercial backyard flocks can be found at http://healthybirds.aphis.usda.govOpens a new window.

February 9, 2022 – The U.S. Department of Agriculture’s National Veterinary Services Laboratory recently found highly pathogenic avian influenza (HPAI) H5N1 in turkeys tested from a commercial farm in Indiana. A veterinarian delivered samples from the flock to the Indiana Animal Disease Diagnostic Laboratory at Purdue University for testing, after approximately one hundred birds died. State officials quarantined the affected premises, and birds on the property were depopulated to prevent the spread of the disease. Birds from the flock will not enter the food system. 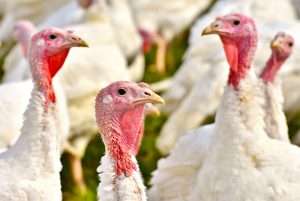 As part of existing avian influenza response plans, federal and state partners are working jointly on additional surveillance and testing in the nearby area. This finding is the first case of highly pathogenic avian influenza (HPAI) in commercial poultry in the United States since 2020. HPAI was last identified in commercial flocks in Indiana in 2016.

Avian influenza does not present an immediate public health concern. No human cases of these avian influenza viruses have been detected in the United States. As a reminder, the proper handling and cooking of poultry and eggs to an internal temperature of 165 ˚F kills bacteria and viruses.

As a precautionary measure, poultry producers ranging from backyard birds to large, commercial operations should be on the alert for detection of sick or dead poultry, including wild birds, chickens and turkeys. Visit the Defend the Flock programOpens a new window for information about practicing good disease prevention with backyard poultry.

How to Report Sick or Dead Poultry

Hobby/backyard poultry owners are encouraged to practice good biosecurity, be aware of the signs of avian influenza and report illness and/or death to the toll-free USDA Healthy Birds Hotline: 866-536-7593. Dead birds should be double-bagged and refrigerated for possible testing.

Cummings received a bachelor of science degree in horticulture from The Pennsylvania State University, with a specialization in vegetable crop and greenhouse production. At PSU, she was a research technician on no-tillage vegetable crop experiments, and a greenhouse assistant in the All-American Selections Research Gardens. Her career in the agriculture industry includes field research, work with dairy and vegetable farms, and as a greenhouse manager, estate gardener, landscaper and market garden entrepreneur. She transitioned to the science communication field after receiving a master of science degree in environmental communication from Antioch University New England. At Antioch, she was a field botany laboratory teaching assistant and manager of the herbarium.

She is currently working with Secure Food Supply New England Director Julie Smith, DVM, PhD, on a project that will enhance prevention, preparedness, detection, and response to emerging and foreign animal diseases for farm producers in the New England region.