The focus of the Secure Milk Supply initiative is to keep milk moving should a foot-and-mouth disease (FMD) outbreak occur. Because FMD would be a national animal disease emergency, the control tactics would include:

The Secure Milk Supply guidelines are designed to manage specific risks of FMD transmission associated with the collection of bulk tank milk and its transport from farm to processor. The risk assessments that informed the development of the Secure Milk Supply guidelines can be found here: https://securemilksupply.org/regulatory-officials/risk-assessment/Opens a new window

It is worth looking at this list from the perspective of who is responsible for doing what. The Secure Food Supply plans are based on the following division of responsibility:

This is all well and good on the surface, but what does this mean during an emergency event when regulatory officials have been charged with containing disease and controlling its spread while simultaneously ensuring a secure food supply for consumers?

Having a PIN (Premises Identification Number) for traceability is a producer responsibility. The national Animal Disease Traceability (ADT) program that applies mostly to interstate animal movements also starts with animal sites registering their location and receiving a PIN. In an emergency disease event, a PIN is necessary on the producer side to apply for a permit and on the regulatory side to process a permit application. This is a critical step, hence my battery of questions about getting and reviewing PINs during a recent New England Secure Food Supply workshop. As part of the Secure Food Supply New England (SFSNE) project, information on PINs that can be posted on state animal health websites is being created by the team. The other piece of traceability information, identification of milk trucks and tankers, is not something I am familiar with. This is an information gap we will fill over the course of the SFSNE project. 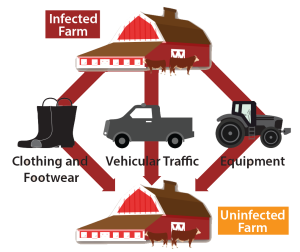 Meeting the biosecurity performance standardsOpens a new window is also a producer responsibility. However, when reading the Secure Milk Supply guidelines it is important to differentiate between the performance standard and the suggested guidance to meet the standard. For instance, the performance standard (6.2) for raw milk tanker cleaning and disinfection at processing plants states, “Conducting cleaning and disinfection (C & D) of raw milk trucks/tankers at the processing plant is one additional step toward reducing the infectious burden of FMD virus in the environment, especially when tanker C & D cannot be accomplished on the dairy premises during raw milk collection. The performance standard is for processing plant officials and animal health officials to work together to determine the best options for tanker C & D to reduce FMD virus spread that aligns with response goals, local capabilities and regulations.” This requires input from all parties to arrive at a workable solution for New England. Our discussions during the permitting workshop are a beginning.

When looking at the biosecurity performance standards from a practical perspective, the focus needs to be on identifying and being able to maintain a line of separation (Section 5) and keeping the drive path of the milk truck as clean as possible (Section 4.2.2). As demonstrated in a previous project in Vermont, C & D of a milk truck on farm is a time and labor intensive effort with unknown effectiveness, especially in the dark and in the rain or snow, none of which normally stop milk trucks from completing their routes. The added problem is even if farmers wanted to C & D the milk truck, and they all did, there would be milk overflowing from bulk tanks because haulers couldn’t complete their routes. Routes are set up so the truck will arrive as close to the end of milking as possible for each farm on the route (and hopefully not have to wait too long at the plant to unload). To do otherwise lengthens the time needed for the farm stop, the time required to complete the route, and the hauler’s work day. 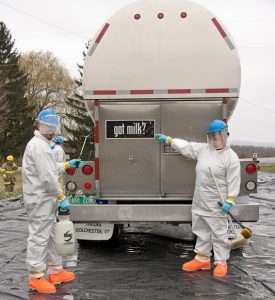 Note, the producer doesn’t have a lot of control over what the hauler and milk plant institute in terms of biosecurity. Nor does the producer have control over what drives by their farm. Producers also don’t have unlimited time, labor, or money to implement biosecurity on their own farm. Thus, if they can focus on what will be most effective and feasible, and believe everyone is doing the same, they will feel what they are being asked to do is fair. Fairness was a key concern expressed by producers in a previous Vermont project (Costs and challenges of developing and implementing a community-wide biosecurity plan).

Given that regulatory officials have the authority to change the requirements depending on the specifics of an actual outbreak, giving thought to what requirements are needed under what conditions in advance of an outbreak is essential. Communicating this to producers will enhance compliance. Think about how the public felt when COVID was found in the United States and the guidance kept changing. Tying what is needed to why it is needed is important when communicating before, during, and after an outbreak.

Categorizing a premises as infected, suspect, or contact and communicating the status of premises in a timely manner is one of the most important elements of preventing the spread of disease. This is a responsibility of the regulatory officials. Correct decisions on permitting movements depends on this information. Forward and backward tracing, active observational surveillance and reporting, and diagnostic surveillance all play a role in correctly categorizing and managing premises.

Destination premises and state are willing to accept the milk should be straightforward, especially if all parties are part of developing the guidance for a state or region. Developing a New England Secure Milk Supply or Secure Food Supply permitting plan is part of the process. Having one set of workshops under our belt is a start!

Jamie Jonker and Miquela Hanselman presented an overview of the biosecurity projects being undertaken by the National Milk Producers Federation (NMPF) during the June webinar of the Committee on Animal Emergency Management of the US Animal Health Association. NMPF represents 84 percent of the milk supply in the United States on behalf of farmer-owned cooperative members.

The Farmers Assuring Responsible ManagementOpens a new window (FARM) program of NMPF has developed a suite of producer education and assessment tools that comprise a uniform nationwide quality assurance/social responsibility program for the industry. Now NMPF is launching a new biosecurity “silo” in the FARM program. Everyday biosecurity is the focus of the piece that all FARM participants will complete. Along with that, NMPF is partnering with the Center for Food Security and Public Health (CFSPH) to provide a voluntary program on enhanced biosecurity. Thus, enhanced biosecurity from FARM is aligned with continuity of business in secure food supply (SFS) lingo.

As Miquela said at the conclusion of the webinar, “The cattle industry is largely unprepared for an outbreak of a highly contagious disease.” It is hard to wrap our minds around something that we don’t have experience with and that is “far away.” The goal of NMPF’s biosecurity program is to help producers go step-by-step from where they are now to having enhanced biosecurity plans. With NADPRP funding, NMPF is developing biosecurity resources for everyday and enhanced biosecurity, developing a biosecurity second-party evaluator and certification training program, building a data collection portal for Secure Milk Supply evaluations, and conducting a virtual exercise. The data collection portal is envisioned as a place to collect farm biosecurity plans and then transmit them to regulatory officials in the event a permit application is being processed.

Enhanced biosecurity is not business as usual. It is heightened awareness and readiness to report signs of disease at the farm level and identification and implementation of steps to prevent the spread of disease before it can be detected.

Dr. Julie Smith is a research associate professor at the University of Vermont. Julie received her B.S. in Biological Sciences, D.V.M., and Ph.D. in Animal Nutrition at Cornell University. Since 2002, she has applied her veterinary background to programs in the areas of herd health, calf and heifer management, and agricultural emergency management. She has taught Animal Welfare, Calf Biology and Management, and ABCs of Biosecurity to undergraduates, mostly in the Department of Animal and Veterinary Sciences.

As a veterinarian and spouse of a dairy farmer, Julie is well aware of the animal health and well-being concerns of dairy animals. Julie has conducted trainings for Extension educators, livestock producers, and community members on the risks posed by a range of animal diseases, whether they already exist in the United States, exist outside of the United States, or pose a risk to both animal and human health. In all cases, she emphasizes the importance of awareness and prevention. In addition, she has led a number of projects on biosecurity and emergency disease preparedness.